The Wolves have left the studio; diary, part IV 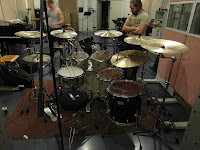 Well now, dear readers. The Wolves left the studio less than 24 hours ago. What were we left with? 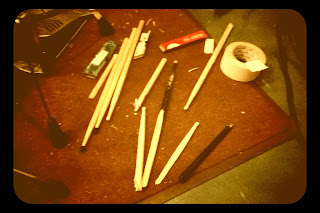 -Several mutilated drumsticks. I guess the majority of the drumsticks Niko brought into the studio were decimated.


-Very little time to sleep. Of the 56 possible hours (from Fri 4pm to Sun 12am), we spent roughly 40 hours in the studio! Bar our sleeping hours (3am-10am) the studio was constantly manned by at least three of us. Sheesh.

-All of the drum takes were done several times, in the case that our human drum machine should have done a mistake. (Well, actually, he did. Quite a few. Every now and then when he was not chopping the drumsticks into wee tiny bits (he is a lumberjack and he's okay)).

-Two studio live tracks, with video. One really slow and thick oldie goldie, reworked, and one from the new album. We were joined by three helpful gentlemen in the Sunday evening, who worked three cameras. If the videos and live takes are deemed releasable, we will treat you with a song + a video twice during the next summer!

-80-100 cups of coffee and a handful of beers consumed. Also occasional fits of pizza psychosis were witnessed.

-A promise of an excellent new full-length album full of some of the most intense and dynamic stuff we've created. But when will we record the rest of the stuff? And how? We've yet to decide, but the current consensus is that most likely the recordings will take place over the course of the next summer, starting in early June. The method of execution is still under discussion. 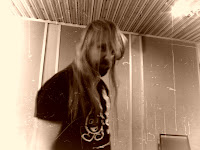 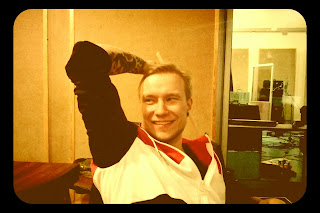 This guy is laughing.

Now for some live takes of a couple of songs, with video. 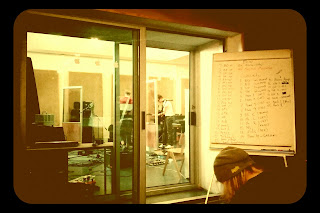 Henkka
Posted by Unknown at 16:52 No comments:

It's Sunday morning and we're all a bit knackered. The coffee's alright and we'll soon go on with the drum recordings. After spending 17 hours (10 a.m. to 3 a.m.) in the studio, we got 5 tracks done yesterday, which leaves 2 more for today, followed by a couple of studio live tracks. Shouldn't take more than 28 hours, I'd say. 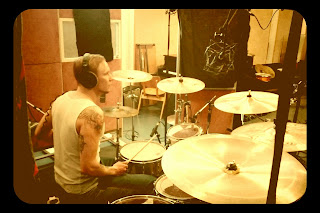 The spirits are high and in the future, when we release a DVD (will there even be DVDs anymore, one can only guess), we'll have some prime footage for the "Behind the scenes" extras. Today's word is "ripuliylipäällikkö", and we will. conquer. the. world. 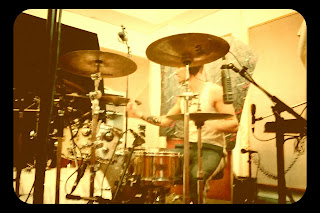 
P.S. We'll post more when there is more to tell. Meanwhile, go listen to KEN mode, so did we.
Posted by Unknown at 11:50 No comments:

The Wolves circling the studio, part I

So, the day’s finally here. We managed to drag ourselves into the studio! 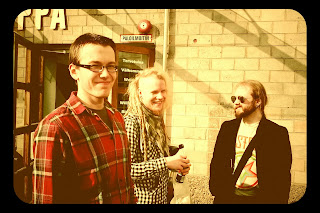 -We arrived to the studio Friday, 27th of April, 4 pm. With us: a handful of guitars, a bass, drum gear, Trace Elliott V6 bass head and Orange + Laboga for the guitars. 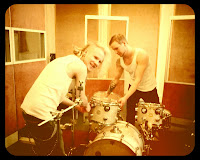 -Actually the name of the game for this weekend is to record the drums for our upcoming album; the guitar and bass stuff we brought are here only for the show. And perhaps for a studio live session, should there be enough time.

-Drums were set up by a bit past midnight, including 20 microphones. Yeah, seriously, 20 bloody microphones. Our drummer Niko and Antti - our trusty old pal behind the desk both in studio and live - went a little crazy with them now that we had access to some great microphones. (Antti stated that the official explanation for this is “Just because we can!”)

-Caffeine levels are kept in check with Henri making us new potfuls of coffee the instant the previous one gets consumed.

-We returned to the studio Saturday morning, April 28th, finally ready to proceed to the recording itself. The total amount of tracks for the upcoming album is undecided to this date, but during this weekend we are supposed to record drum tracks for seven new songs (ok, one of them is previously released). If there is enough time for the studio live takes, we are going to record one new song from this album and one song that goes way back, to the beginnings of the band. 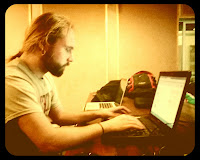 With bloodshot eyes and high expectations from the studio,
Otto.

Or, in Henri’s words, "let’s get those arm flabs moving, and make some massive stuff!" 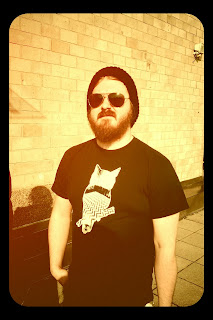