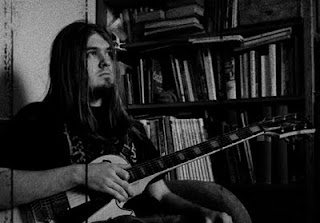 Roughly this time in 2007 I first had the idea of starting a doom metal band. First it was supposed to be just a solo project for me, and this in mind I wrote the first three songs, "One Joyless Night", "Loveless Moonlight/Cruel Dawn" and "Picturesque, Petrified", all of which ended up on the Picturesque, Petrified EP. The photo on the left is our first "official" promo shot and can also be found on the cover of the EP. If I remember correctly, I came up with the name Ever Circling Wolves, inspired by the Earth song "The Dire and Ever Circling Wolves", in the spring of 2007, before recording the EP, but after the photo was taken.
Download the Picturesque, Petrified EP here (in mp3)!
Or here (in a lossless format)! 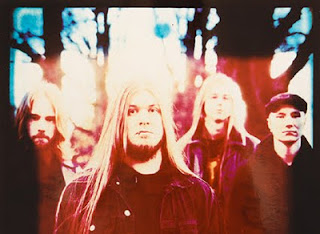 Shortly after completing the EP, I started to gather a line-up for an actual band. Musicians came and went and we weren't really going anywhere until the summer/early autumn of 2008 with (left to right in our first proper promo shot, taken by Miika Karttunen) Otto Forsberg (guitar), Arttu Kantola (bass) and Niko Karjalainen (drums) (with me between Otto and Arttu) joining the fold. New eagerness flowed within us and new songs started to take form. 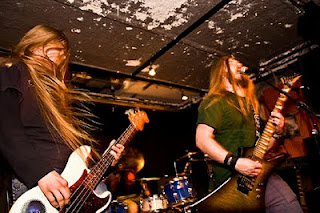 In 2009 we finally got the ball rolling properly. Our first visit to a real studio (Posti Studio) ended with us recording a full-length album instead of an EP like we'd intended. We also played our first proper live gigs, first of them (pictured on the left) at Lepakkomies (Helsinki) with the ever-awesome Temples and Chestburster, and the second at Hevimesta (Oulu) with the very heavy Wandering Midget. Towards the end of the year, more new songs began to emerge.
Download The Silence from Your Room from our bandcamp page! 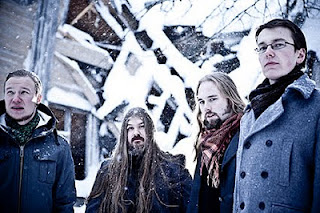 Working with the new tracks was what we began 2010 with. This, however, got left on the backburner somewhat when Arttu decided to leave the band due to commitments elsewhere (check out his bands: Freedomination, Thomas Nobody and Mojo Waves). Luckily, we found Sami Nevala to replace him rather quickly. With Sami in tow, we resumed our arduous task of constructing new music, and at the end of the year stepped into studio to record an EP, Chapter III, which contains a new track, "In the Trench", and a re-recording of "Picturesque, Petrified" from the old EP.
Download Chapter III from our bandcamp page!
Or buy it from Dethroned Productions! 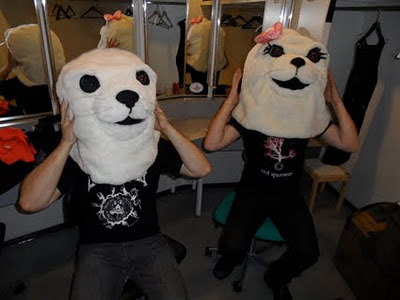 2011 started for us with the digital release of Chapter III, along with some gigs. New songs were introduced to the live set and they've been received well. We managed to pretty much write our next full-length album during 2011 and at the end of the year also got out a physical release of Chapter III with Dethroned Productions. We also got to play one of the most memorable shows of our career, on a bloody cruise ship!

Here's a live video from one of our gigs in 2011 (not the cruise ship show, however):

What 2012 holds in store, I can only guess. But we do have an album lined up, for one. Meanwhile, thanks for the past 5 years!

So, Chapter III is finally out in cd form and can be bought directly from us by sending us email to contact(at)ecwdoom.com or from Dethroned Productions (which we recommend if you're outside Finland). And this means it's time to look forward to new things.

We've been busy writing and rehearsing material for a new full-length and we've now gotten to a point where pretty much the whole album is written and we've even managed to play all of the tracks through, save for the intro track, which is still under construction. The new material expands on what we've showcased before, in terms of dark, plodding doomy goodness, and adds new dimensions and dynamics to the mix, making for a (hopefully) more interesting listen than our debut, The Silence from Your Room.

Some tracks we've already showcased live, such as "Lenore", "Cœur" and "Haunted", and one we've already recorded once, namely "In the Trench", which is found on Chapter III, and they've been received well. "Cœur" has also been recorded on video on more than one occasion, and therefore I find it only appropriate to post a video of it here, so you'll know just what to look forward to.

By the pricking of my thumbs,
Something wicked this way comes