It be the sound of yer doom: Henri's gear

The other day I happened to stumble upon a blog post on a friend's band's blog, where their bassist talked about his gear, so, I though, why wouldn't we do that too? I know I would love to read posts like these from the bands I like and I bet there's some folks out there who are like me and happen to like our music. This is for you. 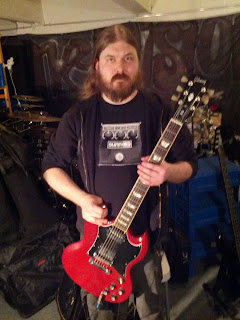 First of all, I'd like to introduce my main tool, which is, of course, my guitar, a Gibson SG Standard. It is, to put it simply, the best guitar I've played so far, fits my hand like a glove. It's relatively new to me, though. The first recording you can hear it on is our Live at Studio web EP from last summer. On Chapter III I played another Gibson, an SG Special Faded, and on Silence, I had a Jackson Kelly. The Kelly had active EMG pickups, and while they sound good, I found since that I like passive pickups a lot more. I think both the SG Special and SG Standard have the same pickups, only the Standard has them covered with those cool-looking chrome covers. The finishing on the Standard is also a lot better than on the Special. I string my SG with D'Addario EJ22s (jazz medium gauge) and tune to C# standard. I like a wound G string.

The cables I have (the longer ones anyway; got some planet waves between pedals) are made by ProCo, if I remember correctly, and they've valiantly stood up to a considerable amount of use and abuse. 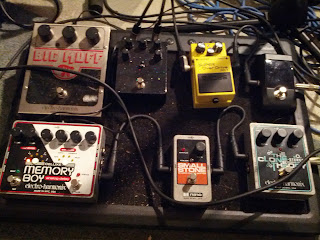 As for the pedals, on the left you can see my pedalboard with a cable going nicely across. The top row is between my guitar and my amp and the bottom row is in the fx loop of the amp. Pre-amp goes as follows (right to left): Korg Pitchblack tuner, Boss SD-1 Super Overdrive for clean boost, Black Arts Toneworks Black Forest Overdrive for crunch and buzz, Electro-Harmonix Big Muff Pi (seldom connected) for a different kind/addition of crunch and buzz. The fx loop, on the other hand contains (right to left as well) Electro-Harmonix Stereo Clone Theory (chorus), Electro-Harmonix Nano Small Stone (phaser) and Electro-Harmonix Deluxe Memory Boy (delay). What do you mean I seem to like Electro-Harmonix? I do though. And I need to get myself a SuperEgo from them. This configuration will make its recording debut on our upcoming album (or rather, has made, since we've already recorded all the guitars). I think the Live at Studio ep had me using all of these except the Black Forest (and the songs didn't need a chorus, so the Clone Theory was unused, but present). They've also seen live action on all our gigs since last May (which isn't that many). As far as past recordings go, I don't really remember what I used on Chapter III. I probably had a ProCo Rat II (reissue, has been sold since) for boost, an EHX Small Clone for chorus (if there was need for it, can't remember, but it has also been sold since). I do remember that I had the Small Stone and Memory Boy that are in the picture, though. On Silence I had fuck all, but we used a Boss HM-2 Heavy Metal for distortion and pretty much everything else was done with plug-ins. 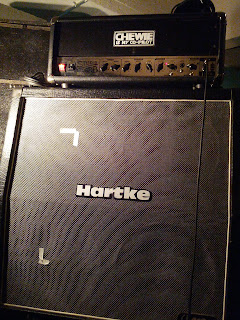 And now, largest for last, my amp (and cab). I'll start with the cab, since it's the simpler affair of the two. It's a cheap 412 from Hartke and it may have Celestion V-30 speakers or it may not (are those even a real thing or did I combine some things?). I bought it second hand from my friend who bought it second hand and, via my friend, I've known it for seven-ish years. The newer addition is the head, Laboga Studio Reverb, a 50W tube amp made in Poland. It has two JJ ECC 83s in the preamp and I can't remember what the power tubes are because I haven't had to replace them. I got the head second hand on New Year's Eve 2009 and it has been used on Chapter III (I think we used it for Otto's guitars as well), Live at Studio and on our upcoming second album.

I think that about sums it up. If you have any questions, though, don't hesitate to ask (by commenting here or on our facebook page)!

P.S. Sorry about the shitty photos. I meant to take them with a better camera, but its battery had died.
Posted by Unknown at 01:18